The 1L at Deauville Film Festival

On Friday 8th, September, our class went to Deauville for the 44th Film Festival. This event takes place at Deauville every year, it lasts ten days. The president of the jury was Sandrine Kiberlain. We had the chance to see two films in English. They were two of the films in competition. In the morning, we saw Puzzle, and in the afternoon, 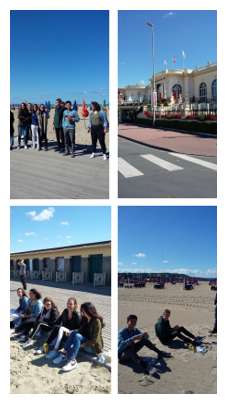 we saw Friday’s child. At lunchtime we had a picnic on the beach.

Agnes is a housewife who doesn’t have an exciting life until the day when she discovers a passion for jigsaw puzzles.

Thanks to charismatic Robert  her new passion makes her become a different person.  By Réno and Léo-Paul

Friday’s Child is a 2018 thriller and drama movie  by A.J Edwards, starring Tye Sheridan as Richie and Imogen Poots as Joan.

Richie, an 18-year-old teenager, has to leave his foster home. He must find a job and a place to live but life is not easy when you have no one to help you. He meets a strange boy with a bad influence and a mysterious girl he falls in love with. Will he manage to get by? That is what we hope but there is a twist in the story …

“Both films were very good but I prefer the first one (Puzzle) because even if it is a simple story, I find that there is more suspense than in the second film (Friday’s Child) as we can guess who the killer is and the reasons for his act. I also found that some scenes were not consistent with the movie’’, Sarah

‘’I love the first movie (Puzzle), it was very interesting and emotional’’, Antoine

‘’I preferred the movie"Puzzle" because for me the story had a meaning whereas in the other one we got lost in the story and  I did  not like this, Thaïs